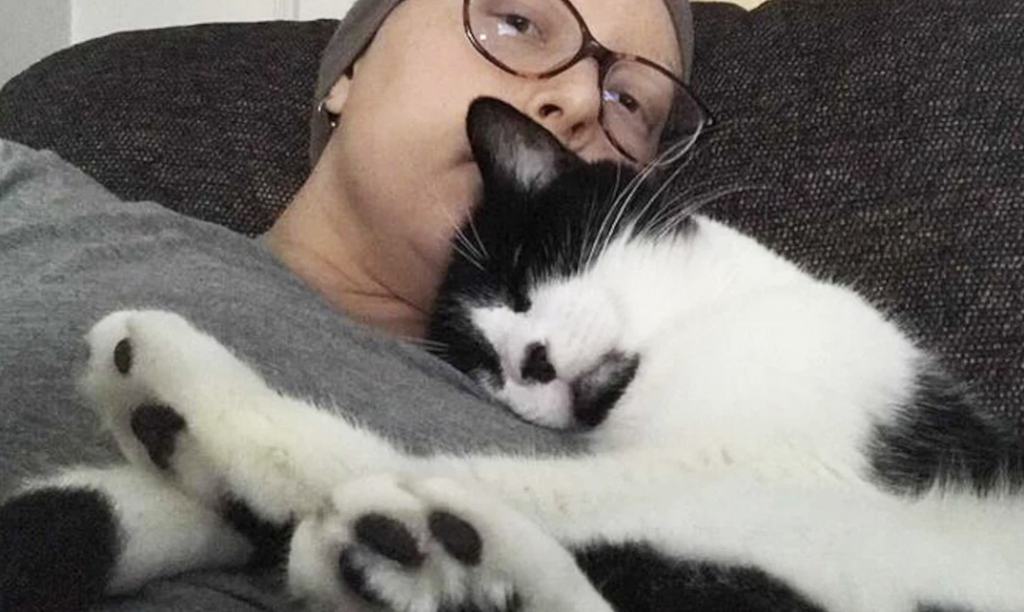 Kate believes her pet kitty let the cat out of the bag, alerting her to a cancerous mass growing inside her left breast.
“Oggy has always loved to snuggle up in my arms but he began to snuggle more aggressively than usual, which was odd,” Scribbins, 35, told Caters News.
“I would try and direct him someplace else, but he just wouldn’t have it. He seemed more determined than ever to make sure he was lying near my left breast.”
Then one morning, after months of noticing her rescue animal’s unusual behavior, the Saint Paul, Minnesota native awoke to a shooting pain radiating throughout her body.
Kate, a married health-care fraud investigator, performed a self-examination on her breasts and discovered a lump.
She was later diagnosed with Stage 3 breast cancer, and she immediately underwent several rounds of chemotherapy, multiple surgeries and radiation.
“It wasn’t until I felt the lump and got the dreaded diagnosis that I realized what he had been trying to tell me all along,” Scribbins said.
“I look back on the changes in his behavior towards me before my breast cancer diagnosis and I truly believe he was trying to alert me to the dangers growing in my body.”
Kate credits Oggy, who she rescued 15 years ago, with detecting her malignancy at its early stages.
But she accepts that most skeptics and non-pet owners will largely poo-poo her pussycat’s prophetic powers.
“I don’t blame people who don’t believe me,” she insisted. “But I’m not above looking like a crazy cat lady if it means someone else is alerted to a health problem sooner than I was.”
Unfortunately for Kate, breast cancer wasn’t the first threat made to her well-being.
She was diagnosed with rare genetic mutation CDH1, which causes both lobular breast cancer and hereditary diffuse gastric cancer, in 2019.
Doctors were then forced to remove her entire stomach. She’s now considered to have no evidence of the disease.
“I can’t say I’m on the ‘other side’ of cancer, because as all cancer patients know, the effects of ongoing treatments and checkups, are never ending,” she said.
However, since completing chemotherapy and undergoing tumor removal surgery, Oggy has stopped focusing his attention on her chest.
“If only I would have realized what he was trying to tell me,” Kate pined.
She joke that if Oggy had the ability to verbally communicate with her, he would have called her “stupid” for ignoring his warning signs.
“If only pets could talk,” she added. “I can’t help but wonder if I could have caught my cancer sooner had I noticed his behavior and listened to him.”
Despite her failure to immediately decode Oggy’s cryptic messages — and the cat’s inability to translate his meows into words of wisdom — Kate is thankful to be a survivor.
“Cancer is forever a part of my life, and I am OK with that,” she said.
But Kate — who shares Oggy, another cat and two dogs with her husband Andy, 37 — realizes that cancer will likely always be a part of their lives.
“It has made me who I am today and I am forever grateful to my amazing family, friends and of course my animals for their emotional support.”
Here’s the link to Kate & Oggy’s published story: