CyberKnife vs. Proton vs. HIFU

CyberKnife vs Proton vs HIFU

Both CyberKnife and proton beam are forms of radiation therapy; however, CyberKnife has many advantages over proton beam radiation as a cancer treatment. CyberKnife is the most advanced treatment available, using image-guided robotics to destroy prostate cancer while preserving the surrounding tissue.

HIFU also is known as High Intensity Focused Ultrasound and CyberKnife Radiation Therapy are both used to treat prostate cancer and are alternatives to surgery or other types of radiation therapy. 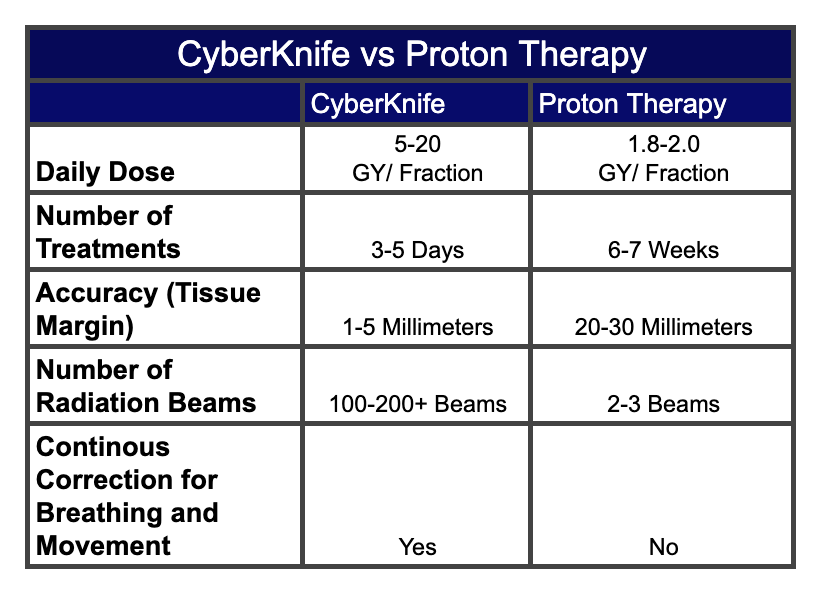 Both CyberKnife and Proton are forms of radiation, however CyberKnife has many advantages over proton beam radiation as a prostate cancer treatment. CyberKnife is the most advanced treatment available, using image-guided robotics to destroy tumors while preserving the surrounding tissue.

CyberKnife Radiosurgery is a highly focused radiotherapy also known as stereotactatic body radiosurgery (SBRT). Unlike conventional radiation techniques traditionally used to treat certain types of cancer, the CyberKnife machine delivers a high dose of radiation in a single or small number of treatments. It is a non-invasive, painless treatment that may be an alternative to open surgery in many cases.

The CyberKnife system uses image-guided robotics to precisely destroy tumors and other lesions with multiple beams of high-energy radiation.Using missile-guided radiation technology to target tumors with pinpoint accuracy, CyberKnife delivers radiation directly to the tumor while leaving healthy surrounding tissue untouched. Because of this missile technology.

CyberKnife therapy requires only five treatments. Each treatment fraction is a much higher dose than given with proton therapy. This is called hypofractionated treatments.

The chart shows the differences between CyberKnife and Proton Therapy treatments. As you can see, CyberKnife is completed in fewer sessions with better accuracy and the CyberKnife is the only technology where there is continuous correction during treatment while the prostate moves and the patient breathes normally.

CyberKnife Radiation Therapy is used to treat low-risk and intermediate-risk localized prostate cancer and is an alternative to surgery or other types of radiation therapy.

CyberKnife is not a knife at all. It is an innovative radiation therapy technology called Stereotactic Body Radiation Therapy (SBRT). It is used to destroy tumors and lesions throughout the body with pinpoint accuracy, leaving surrounding healthy tissue virtually unaffected. It is fast becoming the treatment of choice for prostate cancer treatment. There is no cutting, incision, blood, anesthesia, pain and requires no recovery time.

CyberKnife uses focused beams of intense radiation to destroy cancer cells and shrink or control the growth of tumors. The objective of radiation therapy is to destroy the harmful cells while minimizing damage to healthy cells. This revolutionary prostate cancer treatment has helped save many lives while maintaining patients’ quality of life.

CyberKnife Radiosurgery is FDA approved and covered by insurance

The benefits of Radiosurgery with the CyberKnife far outweigh any potential risks, which are minimal.

▪ Completely non-invasive- Despite its name, there is no knife or cutting involved
▪ Painless with few to no side effects- You can resume your normal activities immediately following treatment.
▪ Catheter is not needed
▪ NO Anesthesia
▪ Quick- Each treatment typically lasts around 45 minutes

▪ Highly successful- The radiation delivered is so precise that the prostate cancer is destroyed
▪ Preservation of sexual function remained the same for most men after treatment.
▪ An alternative treatment option for certain patients. Individuals who are not candidates for surgery or chemotherapy, or those who have been previously treated with radiation, may be a candidate for CyberKnife.
▪ Fewer treatments than standard radiation.Thanks to its remarkable clinical accuracy, the CyberKnife treats prostate cancer in 5 treatments over 2 weeks, unlike the low doses of conventional radiation therapy that require 40-45 treatments over the course of 2-3 months.
▪ Covered by insurance

CyberKnife Radiosurgery is Scientifically Evidence Based

▪ The disease-free survival (DFS) rate was 93.7 percent, indicating there were no signs or symptoms of the cancer during the evaluation period;
▪ The median prostate specific antigen (PSA) value was 0.1 ng/ml. A low PSA value is associated with a reduced risk of cancer recurrence or metastases; and
▪ Patient-reported bowel and urinary function scores showed initial declines which recovered to baseline where they remained throughout the remainder of the study period.

If you are diagnosed with low-risk, localized prostate cancer, CyberKnife Radiosurgery Therapy may be the best treatment option for you. It is safe, easy, covered by insurance, FDA approved and supported by clinical evidence showing that many men are having outstanding success rates a decade and longer after treatment 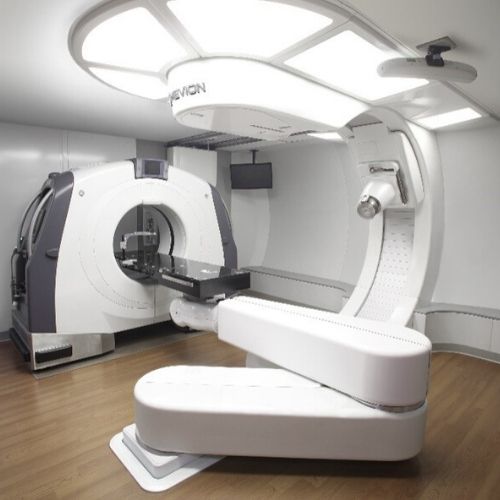 What is Proton Therapy?

Proton Therapy is a type of particle therapy in which high-energy proton beams are delivered to tumors by a cyclotron. With Proton Therapy, doctors determine the precise point in a patient’s body where the proton releases the majority of its energy, maximizing exposure to cancer cells while minimizing exposure to normal tissue. Proton Therapy is usually delivered in 20-25 treatments with typical out-patient sessions lasting less than 5 minutes. Side effects such as fatigue are usually minor and temporary.

Proton beam therapy utilizes lower doses of radiation, so more treatments are required. These treatments use conventional fractionation with small doses given daily over a four to six week period.

The chart shows the differences between CyberKnife and Proton Therapy treatments. As you can see, CyberKnife Therapy is completed in fewer sessions with better accuracy and the CyberKnife is the only technology where there is continuous correction during treatment while the prostate moves and the patient breathes normally. 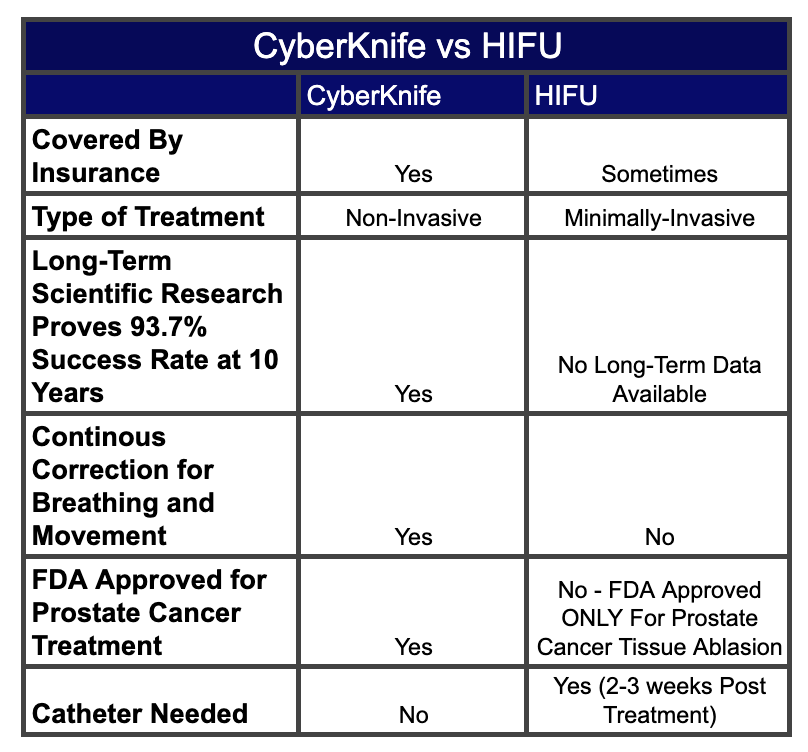 HIFU also known as High Intensity Focused Ultrasound and CyberKnife Radiation Therapy are both used to treat prostate cancer and are alternatives to surgery or other types of radiation therapy.

What You Need to Know About HIFU for Prostate Cancer

· Touted as Non-invasive, however it is Minimally Invasive

· Not Covered by Most Insurance Companies

· No Long Term Studies to Determine Safety and Effectiveness

How the HIFU Procedure Works

HIFU is considered a minimally invasive procedure for the treatment of low-risk, localized prostate cancer and for prostate cancer recurrence in the prostate gland. HIFU is an option for men who are not candidates for open surgery (prostatectomy) or don’t want to undergo surgery or radiation therapy.

HIFU uses high-intensity sound waves to heat and destroy cancer cells. It is not indicated for cancer that has spread (metastasized) beyond the prostate.

Here’s what happens: At the start of the HIFU procedure, a catheter is inserted through the penis into the bladder to catch urine during the procedure and remains in place for 1 to 3 weeks after surgery.

Then during the procedure an ultrasound probe is inserted into the rectum and directs heated sound waves through the walls of the rectum to destroy cancer cells. With the use of MRI or ultrasound imaging, the sound waves are aimed toward the cancer cells, heating up to temperatures as high as 90 degrees to ablate the targeted cells.

HIFU is a 3 hour procedure performed under anesthesia with an additional 3 hours in recovery.
Pain medication and antibiotics are prescribed after surgery and up to 1 week of downtime is required after the procedure.
Potential Side Effects of HIFU Affect Each Man Differently

Potential side effects include:

Erectile dysfunction – Occurs in nearly all cases immediately after surgery. In extreme circumstances, ED can last 18 to 24 months or longer

Urinary incontinence – Most men may experience some urine leakage for several weeks following surgery, but the condition typically resolves itself within a few months

Ejaculatory dysfunction – Occurs in all men

Retrograde ejaculation – Develops in 40 to 90 percent of men

Orgasmic issues – Occurs in about 50% of cases

Penis shrinkage – Frequent occurrence that can worsen over time

Nocturnal and morning erections – Men typically lose these erections immediately following surgery, although they do return over time

Blood or tissue in urine – It is typical to see some blood in your urine while the catheter is in place. You may also see some small pieces of prostate tissue in your urine for at least six to eight weeks following the procedure

Rectal fistula – Very rarely, HIFU can cause a hole between the rectum and the urethra (the urinary tract). Signs of a possible rectal fistula include:

Urine coming out of your rectum
Pain in your pelvis or rectum
Bowel contents in your urine
Air bubbles in your urine
You’re more likely to get side effects if you have had more than one HIFU treatment or if you’ve had other types of prostate cancer treatments prior to HIFU. HIFU risks are increased each time the procedure is performed.

If you have an enlarged prostate you are not a candidate for this procedure.

HIFU is Often NOT Covered by Insurance

Medicare covers the actual operational costs of an approved facility where the procedure takes place however the patient is still responsible for the following:
· The time of the physician who performs the HIFU procedure (and the time of any and all associated clinical support staff)
· The time of the anesthesiologist who administers anesthesia
· Any and all follow-up patient care and support services post-treatment

FDA’s Report on the Effectiveness and Safety of HIFU Concluded:

When considering HIFU as a treatment strategy for prostate cancer you should seek out a qualified professional who has performed a significant number of the procedures.

“I can’t believe I feel so good. Life is great despite living with metastatic cancer for 20 plus years!” 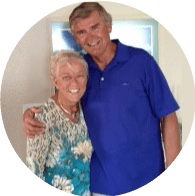 If you have been diagnosed with cancer you owe it to yourself to contact CyberKnife Miami to see if you might be a candidate for CyberKnife. Call (800) 204-0455 today.