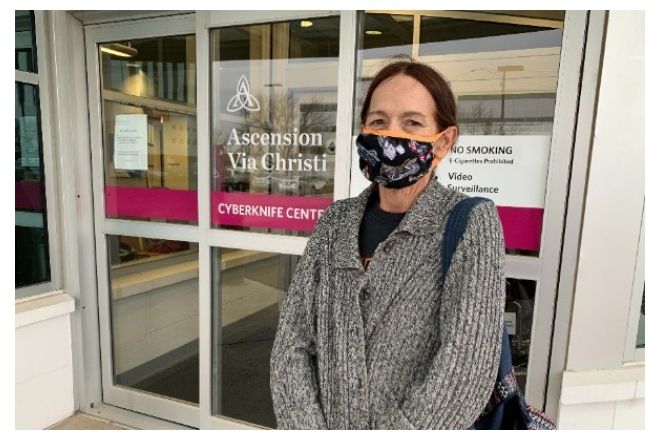 As an 18-year esophageal cancer survivor, Barbara “Bobbie” Thomas is vigilant about scheduling her annual physical.

So when it came time for the 63-year-old’s annual Medicare Wellness Check in January, she went to see her doctor and followed his recommendation that she undergo a low-dose CT lung cancer screening.

“The screening is a 15-minute process that can save your life,” says Lori Hurst, the registered nurse navigator with Ascension Via Christi Cancer Outreach and Risk Assessment who leads its lung cancer screening program.

Bobbie’s primary care doctor, Joseph Luinstra, MD, in Newton, referred her to the program and Hurst completed a brief respiratory assessment and questionnaire to make sure she met the screening criteria, which is based on a person’s age, years and amount of tobacco use.

After the assessment, she had a low-dose CT at Ascension Medical Group Via Christi Imaging on East Murdock, one of four locations where the imaging is done. The radiologist discovered a suspicious spot on her right lung and reported the results to Bobbie’s primary care physician.

Hurst received the results and sent them to cardio-thoracic surgeon Brett Grizzell, who serves as the director for the cancer committee that reviews all findings that require follow-up. Based on the committee’s recommendations, Dr. Grizzell ordered a PET scan and a biopsy, which was done on Feb. 10.

Two days later, Bobbie got her results: It was definitely cancer. She made an appointment with Michael Cannon, MD, an oncologist with Cancer Center of Kansas. Dr. Cannon ordered a biopsy of her left lung and an MRI of her brain to see how far the cancer had spread.

She was referred to Salman Hasan, MD, a radiation oncologist with the Ascension Via Christi Cancer and CyberKnife Centers. On Feb. 23, Dr. Hasan gave her the good news:

Her non-small cell lung cancer had been caught in its earliest stage and was treatable and potentially beatable.

During the biopsy of her other lung two days later, her lung collapsed and the doctors were unable to get a sample.

So the decision was made to treat both lungs once she had the MRI, which she did on March 3.

Once again, she got good news: Her brain scan was clear.

After reviewing Bobbie’s medical history and the treatment options, which at Ascension Via Christi includes a less-invasive robotic surgery alternative, it was determined that for her, CyberKnife treatment was the best course.

A week later, she returned to Ascension Via Christi so that Dr. Hasan could fit her for the stabilizing mold that would be placed under her during the eight 35-minute CyberKnife treatment sessions. 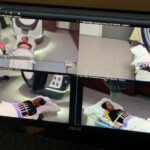 The term CyberKnife didn’t frighten her because she had seen a story on the news about the non-invasive procedure on the same day she learned she had lung cancer. “Since seeing a story about it, I had been kind of intrigued,” says Bobbie, who had her first treatment on March 23 and her last one on March 29.

She will have another PET scan in 90 days to determine whether the cancer is gone.

In the meantime, she remains optimistic about the outcome as she prepares to head back to work at the Cotillion, where she worked for 22 years up until the pandemic put concerts on hold.

“Like I told cancer before, ‘I am meaner than you and you are going to lose,” she says.

Bobbie is also grateful for the technological advances that have made this bout with cancer far simpler and feels blessed to have caught this cancer early. Having had no symptoms at the time of diagnosis, she says, “I would not know now if I had not gone in for the screening.”

“This probably saved my life.”

Lung cancer is one of the most frequently treated diseases at the CyberKnife Center of Miami.

That’s because CyberKnife radiation therapy is becoming the number one treatment of choice by lung cancer patients.

Here’s Why ~ Benefits of Non-Invasive Lung Cancer Treatment at CyberKnife:

*Excellent control of lung tumors due to precise radiation targeting

*Better quality of life for patients while undergoing treatment

With this cutting-edge technology, we can deliver very high doses of radiation to the tumor without damaging healthy or already compromised lung tissue.

It’s also the only technology that can continually track respiratory movement during treatment as the patient breathes, so radiation targets only the tumor, sparing normal lung tissue from being damaged.

Treatments usually take 30 to 60 minutes and are done on an outpatient basis, usually in three to five treatments. If the tumors come back, we can often treat them again.

When considering lung cancer treatment options, do yourself a favor and check out CyberKnife Therapy for lung cancer.

When looking for a cancer treatment center in Miami, consider the CyberKnife Center of Miami because we are the most experienced team and have treated the most patients in South Florida because this is all we do and CyberKnife Radiosurgery has successfully treated lung cancer patients for decades.

And Call CyberKnife Miami to talk to the most experienced CyberKnife oncology team in South Florida with any questions about Lung Cancer Treatment in Miami 305-279-2900.