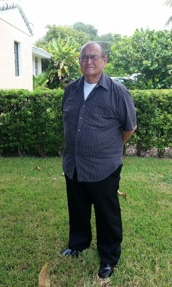 “The treatment was such a simple thing. I had absolutely no side effects and I don’t feel any different today than I did before kidney cancer.”

When Earl Moncada was diagnosed with bilateral kidney tumors and cancer in his right kidney in 2005, he knew exactly where to go.

“As luck would have it I had just seen a story on TV about CyberKnife, a new treatment for tumors.”

Earl’s diagnosis came a short time after the CyberKnife Center of Miami opened its doors and he saw it on the news.

“Thank goodness I saw the news because my doctors wanted to remove one of my kidneys, but when I heard that, I went to CyberKnife Miami and they said, why would you remove it when we can try to treat the tumor with CyberKnife?”

CyberKnife radiosurgery is a non-invasive alternative to surgery for treating cancerous and non-cancerous tumors anywhere in the body. It delivers high doses of pin-point radiation directly to the tumor with extreme accuracy and minimal exposure to surrounding healthy tissue. It kills tumor cells and over time the tumor dies. Because it delivers the highest dose of radiation possible, patients need fewer treatments and the control rate is high.

A radiation oncologist at the CyberKnife Center of Miami who treated Earl, says, “Removing a kidney completely or partially is the standard treatment for this type of cancer, but often it’s not necessary. In this case with bilateral kidney tumors, CyberKnife was the best option for Earl. You can treat the kidney in a shorter period of time and get rid of the tumor without significantly affecting kidney function.”

Earl knows he’s lucky in more ways than one. The tumor in his right kidney disappeared, but six years later another tumor developed in his left kidney.

Earl says, “Imagine if I would have listened to those doctors and had my right kidney removed? I would have had only one kidney and then what would they do? Either I would have been on the list for an organ transplant or maybe even be dead!”

Both of Earl’s kidney tumors were treated with CyberKnife. His last treatment to the left kidney was in 2011 and both kidneys are functioning completely normal. He had zero complications like he never had bilateral renal cell cancer.

Earl says, “The treatment was such a simple thing. I had absolutely no side effects and I don’t feel any different today than I did before kidney cancer. Why wouldn’t people choose CyberKnife over being cut into?”

Dr. James Schwade, CyberKnife Miami’s Medical Director says, “Another good thing about CyberKnife is if the tumor comes back we can often treat it again.”

Earl’s cancer was controlled and his organs were spared.

“CyberKnife Miami saved my kidneys and my life. If I had listened to my other doctors, I probably wouldn’t be around today,” says Earl.

Earl can’t brag enough about the CyberKnife Center of Miami, “The staff is so nice. It’s scary at first but they explain everything so well and make you feel completely relaxed. Any chance I get, I tell people about it and they listen.”

Today Earl, a retired airplane instrument repairman, spends as much time with his five grandkids as possible.

“I hope it’s all behind me. The doctors tell me that I’m cured of kidney cancer. I’m so grateful that I went to the CyberKnife Center of Miami and am very lucky I saw that story on TV about the treatment because my doctors sure didn’t tell me about it.”