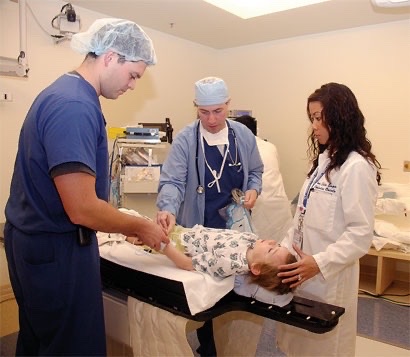 Selene Greenway knew her 5-year-old daughter was dying when the emergency room staff asked if she had a camera. Unbelievably, Brenna, a previously healthy kindergartner who had complained that April evening of a headache, was now about to be airlifted to a nearby hospital for brain surgery in a last-ditch effort to save her life.

“I could see Brenna slipping away in front of me,” said Selene. “I took her picture with my cell phone, and then they raced her to the helicopter.”

Brenna was lucky. Although she had suffered a severe brain hemorrhage, surgeons were able to stop the bleeding and remove most of the abnormally tangled blood vessels—a congenital condition known as an arteriovenous malformation—that had caused the problem. But a small knot, and with it the risk of another bleed, remained deep beyond the reach of a surgeon’s scalpel.

Although she recovered from that surgery, Brenna’s parents knew she was living with a time bomb in her head. To defuse it, they turned to CyberKnife Radiation Therapy, also known as Stereotactic Body Radiation Therapy (SBRT) or Radiosurgery.

CyberKnife has been used for more than three decades treating patients of all ages, including children.

CyberKnife offers two important benefits to patients and physicians: Younger, more wiggly children or infants can be anesthetized for short periods to keep them still during the procedure, and patients of all ages can undergo treatment without being locked into the large metal head frame required by other radio surgery treatments, such as the Gamma Knife.

“This is a huge advantage for kids like Brenna,” says Dr. Michael S.B. Edwards, pediatric neurosurgeon. “Young patients in the past were usually required to wear a Gamma Knife head frame, and had to remain anesthetized during the entire, often daylong, procedure. Now we can treat newborn infants up to older children, who can hop off the table and go home or to school after the initial imaging step while we plan the treatment strategy.”

CyberKnife, a noninvasive process uses tiny, focused beams of radiation to perform radio-surgery on a patient’s head or body. This technique allows doctors to attack trouble spots deep within the brain while minimizing the dose of radiation to surrounding healthy tissue. This issue is particularly important in children, whose brains and bodies are still developing.

A radio-surgery alternative to the CyberKnife, the Gamma Knife, is also used, but the Gamma Knife relies on a rigid metal frame attached directly to the patient’s skull to orient the radiation beams, making it difficult to treat infants or young children with small or fragile heads. Because the frame cannot be removed between the initial imaging and subsequent treatment, doctors also have to work fast.

“With the Gamma Knife, the clock is ticking,” says Dr. Edwards. “We have to place the frame; perform the CT, MRI or other imaging studies, get everyone involved to meet and plan the treatment, and then treat the patient, all while the patient is intubated and asleep. It’s not an optimal situation.”

In contrast, the CyberKnife, which was developed at Stanford University by Dr. John Adler, uses a mesh mask to stabilize the head. The technology tracks any unintentional movements on the part of the patient and adjusts the radiation path as necessary.

Children who can understand the importance of holding still can undergo the treatment while conscious; squirmy infants and younger kids can have short-term anesthesia for the approximately hour-long diagnostic and treatment sessions.

“The difference between the two technologies is pretty striking,” says pediatric anesthetist, Dr. Anita Honkanen. “Gamma Knife patients are usually anesthetized and intubated for hours, and often have a prolonged recovery. With the CyberKnife, recovery is quicker. And we can often treat children with minor colds who would otherwise need to be rescheduled until they’re healthy.”

Finally, the CyberKnife’s laser positioning technology makes it possible to treat tumors in other areas of the body.

Despite her parents’ relief, Brenna, an outgoing and social girl, likely had her mind on other things.

“One little girl told me ‘I want to go to school’,” says Dr. Iris Gibbs, recalling one of her first pediatric CyberKnife patients. “That’s what was on her mind. And that’s what she did. She went to school immediately after her treatment. This made a tremendous difference to the family and to the child, and I was very happy to be able to offer this to her.” ~  Written By Krista Conger

The CyberKnife Center of Miami’s, Dr. Mark Pomper, a board certified radiation oncologist says, “Surgery is the most common treatment for children however if radiation therapy is required after surgery for tumors that neurosurgeons cannot completely remove and for the most malignant tumors, CyberKnife Radiation Therapy has distinct advantages and may also be used to treat tumors in locations where surgery is not safe.” He adds, CyberKnife is often the best choice because the radiation beams are so highly pinpointed, not damaging healthy surrounding tissue.”

“The CyberKnife is one of the most advanced forms of radio-surgery used to treat children with all kinds of tumors. It’s a painless, non-invasive treatment, that delivers high doses of precisely targeted radiation to destroy tumors or lesions anywhere in the body. After treatment is over most children can go about their daily activities, including going to school or play,” says Dr. Pomper.

For information about treating children with CyberKnife contact the most experienced CyberKnife Team in town at the CyberKnife Center of Miami.

Here’s our number 305-279-2900. We’re happy discuss any and all treatment options that are best for your child, whether that is CyberKnife or not. We only want what is best for any patient and we put patients first, always!