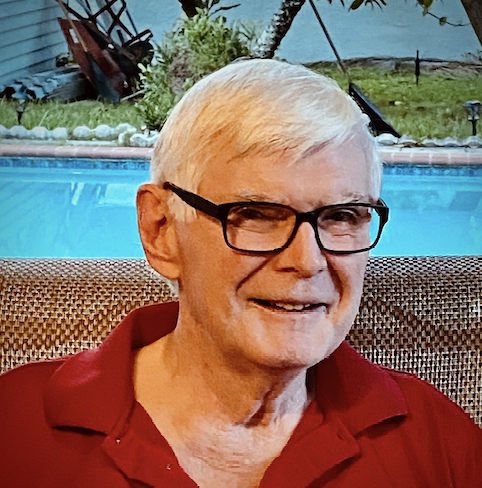 Everything Paul does in life is big and with a “I will not be defeated,” attitude.

He was a manager with a large international CPA firm and the CEO of the largest Miami shipping line operating in the Port of Miami. Today Paul is an owner of The Big Little Shrimp Company selling products to food stores nationwide.

At 79-years young, Paul can also be described as a lifelong student. He’s a ferocious reader who enjoys learning about everything and when necessary, self-educates.

“I got polio at 14 and told my mom I refuse to be a cripple. I read all the books I could on polio and how to rebuild my muscles. I worked non-stop and got strong enough to walk, run and play baseball again.”

When Paul was diagnosed with prostate cancer in 2008 he took that same non-defeatist attitude.

“There was no family history of prostate cancer, but I knew if I lived long enough there was a chance I could get it, so I had annual PSA checks and in my 60’s my levels started going up,” Paul says.

A biopsy showed a very tiny tumor in a small portion of the prostate.

“My urologist said you have the kind of prostate cancer that’s very slow growing. You’ll likely die of something else before it’ll kill you, so we took the watch and wait approach.”

As every patient should, Paul again educated himself about his medical condition.

“I read a lot about what to eat to help slow prostate cancer growth and was even more cautious about my diet. I always took good care of myself. I never smoked and after being diagnosed with cancer avoided alcohol. I was always physically active and strong, but my PSA levels started shooting up.”

Twelve years later another biopsy revealed the slow growing cancer had accelerated, was spreading and it was time to treat it. It was important to act now while there was no evidence it had spread beyond the prostate. Paul’s urologist recommended standard radiation therapy which meant five treatments a week, for eight weeks, totaling 40 treatment sessions.

Paul says, “I had already done a lot of research on every possible treatment and asked him about CyberKnife radiation therapy because it only requires 5 radiation treatments over 10 days. The doctor said I could consider that and gave me a brochure from the CyberKnife Center of Miami.”

“I knew mentally I couldn’t handle 40 treatments over two months. No one should have to. It was overwhelming. I have diverticulitis, spine problems and neuropathy in both legs. I do not drive so I would’ve had to depend on others to drive me to all those appointments and it would also interfere with my work growing our business.”

“But my urologist advised me to consider both types of radiation therapy so I called CyberKnife Miami and another cancer center. One thing was certain, there was a huge difference in when I could get treated and how I was treated.”

“Cyberknife Miami’s oncology team could see me within a week and start treatment almost immediately. The other cancer center would take over three weeks for an appointment to meet with the doctor and months before treatment would begin. I didn’t want to wait that long and risk the cancer spreading. As soon as I let the other cancer center know I was not going with them, I got a call from the center’s doctor pressuring me to reconsider.”

“A day later, I received a call from their in-house pharmacy asking for my credit card to charge 9-thousand dollars for immunotherapy injections and pills not covered by my insurance. I told them no, I wasn’t using their facility. They suggested I buy the medication anyway for future use. The next morning their doctor called and starts pressuring me again to go with 40 treatments and pay for the medications. Plus they already had me scheduled for several tests and appointments I never knew about and I had to cancel. It was such a waste of time.”

“In the meantime I did more homework reading the history of Cyberknife Technology. I read reviews from patients who were treated successfully and still doing well many years later. I read the CyberKnife Miami brochure, called and they were wonderful to work with right from the start. There was no non-sense. They were professional, the personal attention they give you is so important, they are all so helpful, compassionate, the whole team its absolutely delightful.”

“On my first visit I met with radiation oncologist Dr. Mark Pomper and I liked what he had to say.”

Dr. Pomper says, “For localized prostate cancer, like in Paul’s case, we have an over 90% cure rate.”

Dr. Pomper adds, “Two main things convince many patients to choose CyberKnife. The first is the precision of the radiation beam. The second is CyberKnife technology can detect even the slightest motion of the prostate during treatment and then stop to recalibrate. This did occur during one of Paul’s sessions. These features allow us to target only the tumor with little risk of radiation harming healthy surrounding tissue. Needing just five treatments is also a big factor that appeals to patients. Once they decide to go with CyberKnife, they feel calm and relieved they don’t have to deal with all those treatments and potential serious complications of radiation therapy.”

Paul says another reason he chose CyberKnife Miami is convenience and the ease of scheduling treatments.

“They are located in one building where a number of tests and scans were completed. The office is easy to get to and park. I had been told about patients having bad experiences at hospitals. They’d wait for hours to get treated and sometimes had to come back the next day because they ran too late.”

“I have no regrets and would absolutely recommend CyberKnife, not just for prostate cancer but for many things. It’s been around for more than 20 years. I’m completely satisfied.”

“I had some side effects including urinating problems, burning and diarrhea, but I called and right away they told me what I needed to get over-the-counter at the pharmacy. Dr. Pomper prescribed a medication and within about a week my problem subsided. Within a month I felt as completely normal as I could having diverticulitis, spinal problems and neuropathy in both legs from polio.”

“I’m back to work. My mind functions well. One of my doctors says I have the strength of someone 30 years younger. My hands are incredibly fast. I can still catch flies.” (He laughs)

“I will continue being monitored for prostate cancer and have no plans to retire. I take the attitude that I will not be defeated. It’s not like I have to win every time, because some things are out of our control.” I have been a fighter all my life.”

Dr. Pomper says, “Paul’s prognosis is excellent, and we expect he will win the prostate cancer battle.”

Dr. Mark Pomper is a board certified radiation oncologist and owner of the CyberKnife Center of Miami. He welcomes phone calls from anyone to discuss all treatment options, whether that’s CyberKnife or not. He encourages patients to explore all their options before making a decision.

To find out if we can help you or a loved one call the CyberKnife Center of Miami at 305-279-2900 & go to our prostate cancer website now to learn more.

To learn more about CyberKnife technology go to the manufacturers website www.cyberknife.com